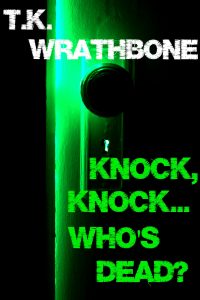 *to be read second after I Spy With My Little Eye, and before It Creeped at Midnight*

After a menacing warning, Blake Williamson has been told he will get his dead mother back within the week, that she will knock three times and then three more. It also means his wicked witch of a stepmother, Melissa, will have to die in her place.

Not that he cares. He hates his stepmother and wants her gone. His mother is the only woman he wants in his and his father’s life.

But nagging doubts about his mother’s accident and death are leaving him cold. Melissa had told him something just before she fell down the stairs that prompted Blake’s suspicions to rise up, and now he has a driving need to look into Melissa and her past. And he finds it all right, a past she wants buried and hidden forever…especially after what she did to get what she wanted…